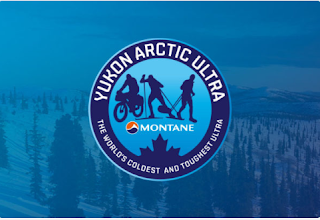 My participation in Yukon Arctic Ultra 2020 encouraged me to start blogging about my sport and other challanges. At the moment full content is about YAU, so try it! And start from here...

Some basic information about YAU

Yukon Arctic Ultra, or Montane Yukon Arctic Ultra as the full name says, is a winter ultra race which follows Yukon Quest trail - famous sled dog race.
The scene of YAU is Yukon - a territory in northwest Canada. It is huge area, bigger than Sweden, sparsely populated.
The event usually starts at the very end of January, in 2020 guys will start on 30th January.
YAU selfnames the world's coldest and toughest ultra. It may seem exagarated, but 3 important things should be considered:
- weather
- distance
- solitude/isolation

Weather in Jukon in the middle of the winter means low, very low, or extremely low temperature. -20 degrees Celsius is a daily norm. But this event remembers the editions of -40, and even -50 degrees. There are no words to describe such condition for human, who needs to perform in the race.

Distance of YAU or rather distances of YAU varies from marathon to 300 miles. Every second year additional 430 miles distance is available.
There are 3 modes of discipline racer may choose, which can be either mountain bike (so called fat bike), xs-skis or foot. Footing dominates among participants

Isolation comes from distance, long nights and quite limited number of participants. Guys do not march in the crowd :-), so you need to be acustomed to solitude. I rather like it.

The race has no rewards. Finishing is considered as the goal and the finishers' race reports prove that reaching the end line is exeptionaly rewarding.

Or better watch this playlist on YouTube, gives some sort of feeling about YAU.

I am going there for the first time and my distance is 300 miles.
I am the fourth Pol who tries to finish this race. In the past Polish mates did not reach the finish line. It is still waiting for the Polish finisher.

Popular posts from this blog

YAU vs. climbing Everest and other press and blogs

December 24, 2019
Yukon Arctic Ultra gets attention in press and blogs. Usually it comes from the participants and is sometimes triggered by outstanding accidents taking place there.
I put here some of my internet findings to let you go through and make yourself familiar with the race. And saying that I question it at the same time, because, and you will read about it, YAU is hardly a race, it is something people call the adventure, the dream, the...
Well, find for yourself.

Press, blogs, otherYukon Arctic Ultra vs. climbing Everest - interesting comparison coming from the one man who has done both

Outside Magazine about YAU after the 2018 edition, which was extremely cold and unfortunately witnessed far the worst personal health outcome.

December 18, 2019
Planning participation in Yukon Arctic Ultra calls for thoughtful thinking and consideration. I believe preparation for the event is highly rewarding:
it makes the event longer :-), meaning that you live with that not only being in Canada, but months before while planningit makes your odds for finishing much higher, assuming that your planning is proper and really gives you advantage at the starting line To make it easier for me I finally concluded that I should develop a strategy for this event, or even 3 strategies relevant for 3 parts of this challange. These are the parts to be considered:
geartrainingracing Gear strategy Winter exploring is always about gear. The humans are too vulnerable to survive in the severe condition and racing makes it only harder. So proper list of the equipment is mandatory. My strategy for this issue is
HAVE EVERYTHING WHAT IS NECESSARY, and skip SUPER STUFF
Nicely said, but what it means in particular? Saying NECESSARY I mean
not to compromise on my safe…
Post a Comment
Read more

Maciej Żyto
I am happy father, husband and the manager. Polish runner and the outdoor enthusiast. In case you are looking for my professional face, go linkedin.com/in/maciejzyto/